National Pro-life organization advocating for the legal protection of every human life from conception to natural death. We aim to educate public consciousness, elect pro-life leaders, and support pro-life laws and policies in Canada and abroad. We organize the Canadian National #Marchforlife and coordinate #LifeChain in Canada

Court Case: In January my lawyers began work on our legal argument submissions to the judge, the final piece of evidence, as I understand it, before arguing in court. My lawyers are also involved in defending 40 Days for Life in an ongoing injunction application against social media activists who tried to interfere with their vigil campaigns.

In the most recent account submitted to me, I was sorry to learn that fundraising to date has been used up, to pay for the 14 cross-examinations conducted on Crown witnesses in 2021. I am appreciative of additional funds raised by supporters of Mary Wagner, but the legal costs for preparation for the argument and court hearings will soon be incurred, I am again appealing for donations from those who are able.

In 2019, we provided 6 affidavits in support of our constitutional challenge, including support from Archbishop Terrence Prendergast, and Dr. Christian Elia, Executive Director of the Catholic Civil Rights League.

In response, the Crown served 15 affidavits of various witnesses, from abortion industry advocates, to Ministry and civic officials.

As a result of more recent developments, one of the Crown’s affidavits has been withdrawn, rather than face further exposure through the court process.

Cross examinations on these materials will occur over the next few weeks, with an expected hearing date in 2021.

On Wednesday, October 24, 2018, Fr. Tony Van Hee S.J. was arrested and charged while praying peacefully and holding up signs about free speech across the street from the Morgentaler Abortuary. The signs read: “The Primacy of Free Speech: Cornerstone of Western Civilization” and “Without Free Speech The State is a Corpse”.

Fr. Tony has been charged with intimidating or attempting to intimidate people going to the abortion center under Ontario’s totalitarian abortion bubble zone law, even though he wasn’t advocating against abortion. 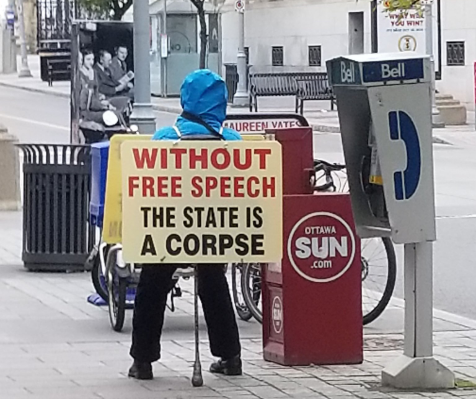 When speaking to media, Fr. Tony said “I will fight it on my own and if they fine me, I will not pay it and go to jail…If they jail me, I will fast."

Join us in making sure that Fr. Tony DOES NOT FIGHT ALONE!

For more than 28 years, Fr. Tony  has been a prayerful and powerful pro-life presence on Parliament Hill, praying and fasting for an end to abortion.

Over the years, he has been jeered and heckled, parliamentarians have tried to silence him, his signs and property have been vandalized, and he was even harassed by a Member of Parliament who was offended by the truth Fr. Tony was presenting.

For almost three decades, Fr. Tony has been a tremendous witness to life. The late New Brunswick MP Elsie Wayne once said that he “is someone the whole country should admire.”

Not only do we admire him, we have promised to help him.

Please consider donating to help Fr. Tony with his legal and other fees.

NOTE: All donations (less credit card/processing fees) will be sent to Fr. Tony. Campaign Life Coalition has set up this crowdfunding page on his behalf.